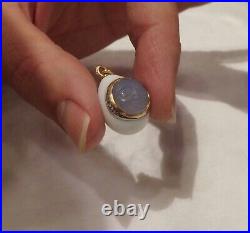 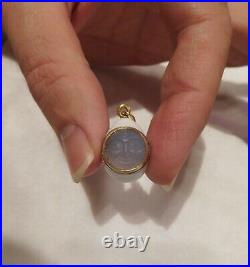 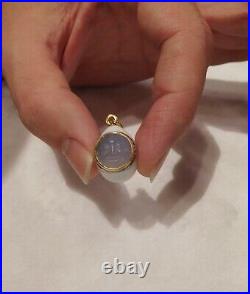 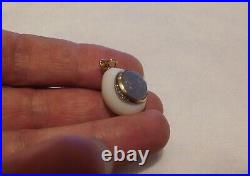 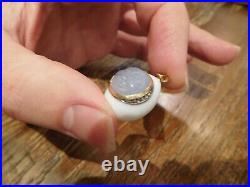 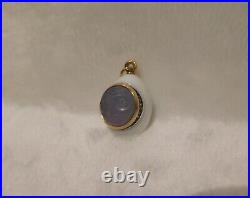 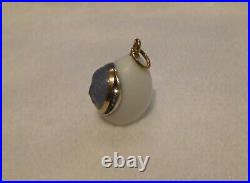 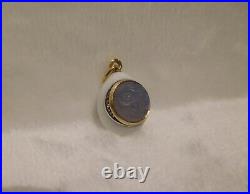 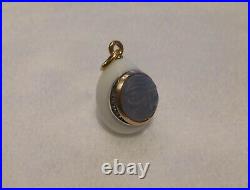 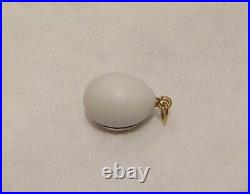 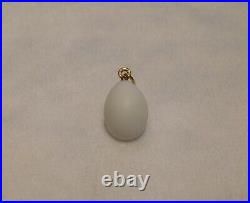 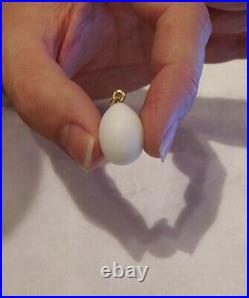 I present you with a jewel that only shows up Once In A Blue Moon. One Of A Kind Imperial Russian 1900 FABERGE 14K Gold Diamonds Blue Man On The Moon Easter Egg Charm Pendant?? Fully hallmarked Henrik Wigström initials as well as the 56. Zolotnik mark which stands for 14K gold, followed by the Cyrillic initials of the assayer Yakov Lyapunov. Who has been recorded as an assayer of Karl Faberge in Saint Petersburg from 1896 to 1903.

The white egg is comprised of some sort of white quartz, marble or agate, while the carved blue moon is comprised of a bluish stone perhaps blue onyx chalcedony? Extremely cool because it combines a blue moon and the man on the moon, and as the old saying goes once in a blue moon, but with the diamonds which represent the stars and thus eternity its an eternal blue moon, so a man on the moon with eternal love. There are seven old mine cut diamonds which are set on each of the two side edges in what appears as crescent most likely for the seven days and nights of the week, almost like an eclipse that moves in both directions so eternal swinging love, one jewel with so many different ideas, never seen anything quiet like it, have you? Such a rare jewel that it only appears once in a blue moon = This is one of the earliest examples of a man on the moon jewels and what a jewel. For Faberge was a trend setter.

To inspire many jewelers in the following decades. As you might well know blue is the color of true love, an I mperial Russian Easter egg charm representing eternal true love! Catch this rare moon before it sets away for another century!

The seller is "bluefirebreather" and is located in this country: US. This item can be shipped worldwide.