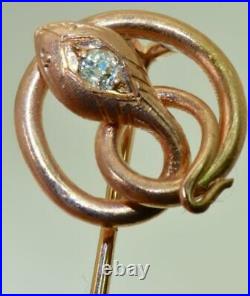 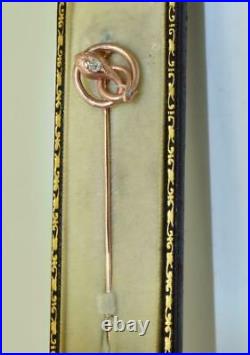 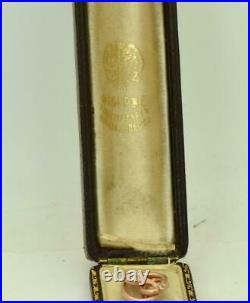 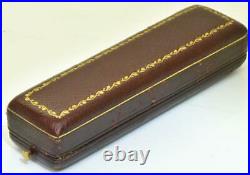 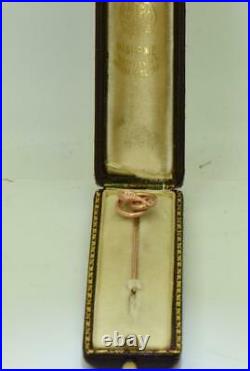 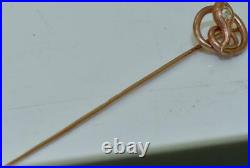 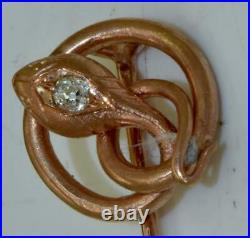 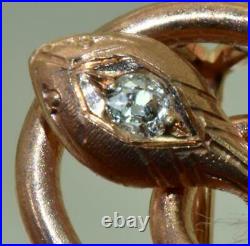 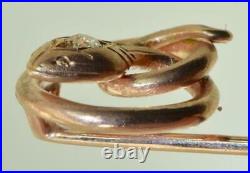 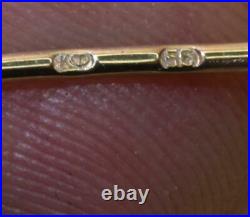 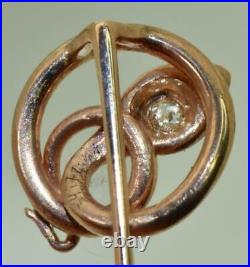 Excellent condition for its age. It comes with the original luxury morocco leather presentation box, signed in Russian Faberge, St. A must for every serious collector. 70mm from end to end.

Serpents are one of the most ancient and widespread of mythological symbols - just look at Egyptian and Chinese mythology. This is perhaps why snakes are so often represented in jewellery, their rope-like bodies fascinating and perfectly fitted to being a coiled necklace, stylish bracelet or banded ring. The symbolism of the snake dates back thousands of years, and many civilisations have interpreted the creature to represent any number of things: good, evil, rebirth, poison, fertility, death.

While there are historically some negative connotations to the serpent, there is plenty of evidence that points to positive cultural meanings as well. Ancient Egyptians used the serpent to represent royalty and even deity. In Hinduism, the creature represents desire and sexual passion. The Romans took the symbol to mean everlasting love. In ancient Chinese mythology, it was believed that the snake had close relations with the gods and that they were able to prolong one's life.

The creature was considered to be a symbol of reproduction and good luck. The Victorian era brought snake jewellery into the limelight after Prince Albert proposed to Queen Victoria with a ring in the image of a snake featuring an emerald-set head. The Queen pronounced the snake to be a figure of eternal love.

Reaching eminence in the 1840s, the serpent represented eternity and wisdom during this period and was a widespread motif on brooches, pendants, rings, bracelets and all sorts of ornamental accessories... Provenance:This unique piece comes directly from the famous Skulls collection of Dr. Atanas Karamov, who was the personal physician to King Ferdinand I of Bulgaria. Karamov was also a member of. The first Bulgarian Regular Masonic Lodge named "Balkanska Zvezda" c1890's.

His collection contain over 1200 skull watches, skull goblets, skull victorican jewelry etc.. NOTE:PLEASE OBSERVE CAREFULLY THE PHOTOS! IT IS A SIGNIFICANT PART OF THE DESCRIPTION. Every potencial defect which is shown in the photos, but not mention in the description, will be considered for described. All the photos shoot by professional Nikon 105 Macro lens under 40x diopter magnification, so you can explore even the smallest detail like under microscope!

The Victorian era brought snake jewellery into the l. This item is in the category "Jewellery & Watches\Vintage & Antique Jewellery\Brooches & Pins". The seller is "riaerica2000" and is located in this country: BG. This item can be shipped worldwide.