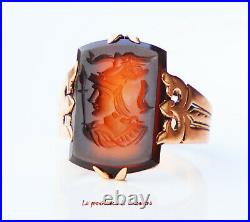 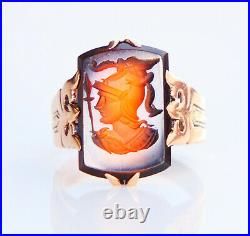 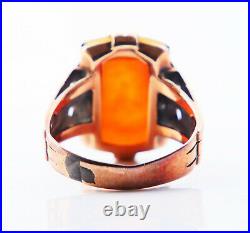 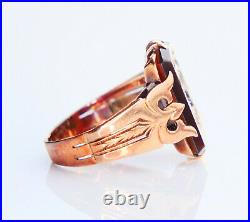 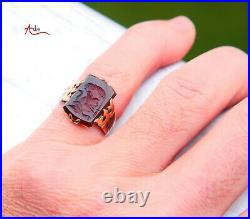 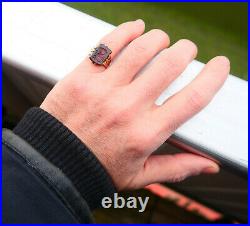 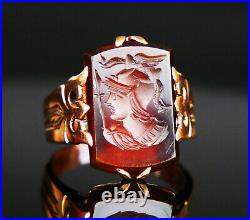 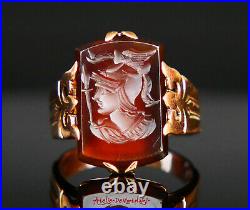 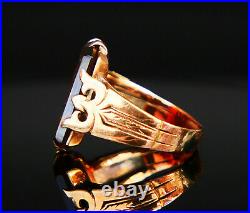 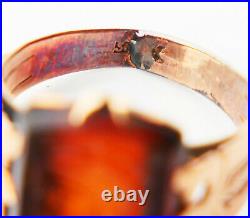 This ring is unisex and is suitable for Men and Women if the size is right. Made in Imperial Russia ca. Hallmarks partially Hallmarked with Imperial Russian 56 (14K) fragmented hallmarks used before 1908, parts of other original hallmarks were removed / damaged in the process of past resizing. Apparently tin was used to solder the band, it became darkened / patinated with time on both sides. Used fine condition, cameo is secure in trident shaped claws.

Stone with very minor signs of wear. Decades old patina on metal that I didn't dare to polish off. Size : Ø 9 US scale / 18.89 mm.

S Fragmented hallmarks on old Russian rings made at Imperial period is a common feature because of the way these rings used to be hallmarked. Very , very often Russian Jewelers would hallmark the narrowest part of ring's band, both outside and inside and as a result such hallmarks would often become naturally damaged as a result of natural wear (if placed outside) or as a result of custom (careless) resizing that could often be necessary if the ring changed the owner, say after 30 - 40 years of its appearance when such hallmarks were still relatively common and seemed not so old to care about so much..

Jewelers would often cut the narrowest part of the band to make it smaller or bigger... Thus a lot of Russian rings have fragmented or lost hallmarks and that makes proper ID difficult or impossible.

Swedish Jewelers would always hallmark the internal side of the band closer to the crown and such areas were normally not touched in the process sizing and thus most of Swedish rings have hallmarks well preserved even after a couple of centuries (or more) of existence and all id data is readable. Buyers from EU countries will be charged extra 25 % of the sum stated above. I do my best to photograph and describe condition as accurately as possible. All items S ell A s is.

The item "Antique Imperial Russian Minerva Ring Red Onyx solid 56/14K Gold ØUS 5.75 /4.1gr" is in sale since Saturday, January 16, 2021. This item is in the category "Jewelry & Watches\Vintage & Antique Jewelry\Fine\Victorian, Edwardian 1837-1910\Rings". The seller is "optimistic555" and is located in Copenhagen. This item can be shipped to United States, all countries in Europe, all countries in continental Asia, Canada, Mexico, Brazil, Australia.