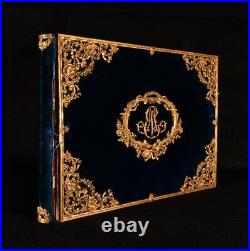 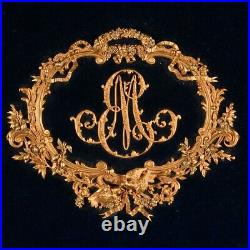 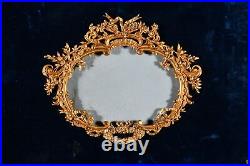 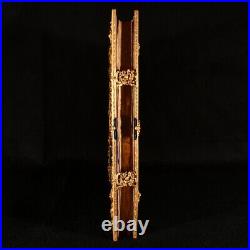 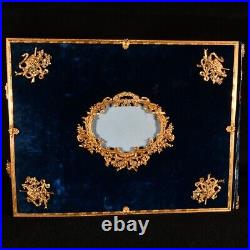 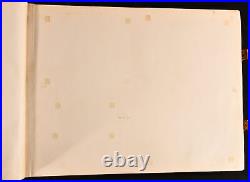 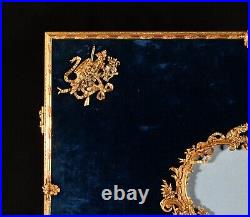 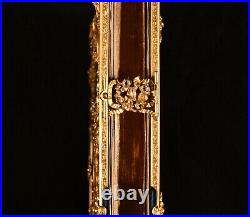 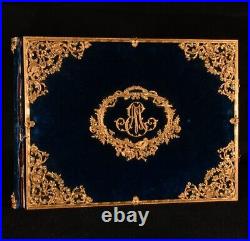 A sumptuous photography album bound in rich blue velvet with golden decoration designed for the Russian Royal Family of the early nineteenth century. This book weighs 5 KG when packed. With the Imperial cipher of Elizabeth Alexeievna and Maria Feodorovna to the front board. This symbol was used between 1801 and 1825 for the Empresses.

Elizabeth Alexeievna was Empress of Russia whilst she was married to Emperor Alexander I, whom she wed when fourteen. Maria Feodorovna was her mother-in-law, the Empress, senior to Elizabeth.

Both of Elizabeth's children tragically died in infancy. Alexander I ruled for twenty-four years, and was succeeded by his brother Nicholas I. Bound in beautiful full royal blue velvet, with decorative embellishment in gold across the boards. The royal monogram is in gilt to the front board.

Photographs have been removed from the album, leaving it ready for future memories. This would make a remarkable wedding or christening gift for one with befitting initials. In a sumptuous full velvet binding with gold decoration and functioning clasps. Externally generally smart; joints are worn and tender, with rear board particularly strained and near loose. However, the boards themselves are in marvellous condition.

Internally, both hinges are strained. Pages are generally bright and clean, with the odd mark. Fine - Very well preserved copy showing very little wear. Only one or two minor faults, really a very attractive copy. Quite a wide term meaning no major faults but probably several smaller ones.

Often expected given the age of the book, but still a respectable copy. Some more serious faults as will. Be described in the condition report under'condition. Good Only - Meaning one or more faults that could really do with repair. As with good only above but with other faults. Leaving a compromised copy even after repair. Really bad and possibly seriously incomplete. We only sell books in this condition where their rarity or value makes them. Major defects will be described.

This item is in the category "Books, Comics & Magazines\Antiquarian & Collectable". The seller is "the-mad-librarian" and is located in this country: GB. This item can be shipped worldwide.