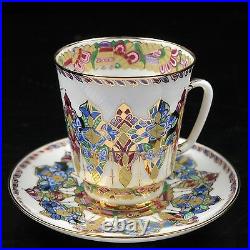 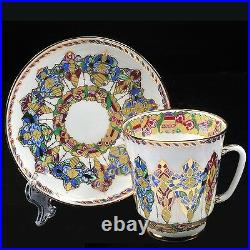 Porcelain Bone Cup and Saucer. The item is HAND PAINTED and has a stamp of the factory on the bottom. Dear customers, visit our store, please. There are a lot of as beautiful things as this one there. Here is our store - Best Russian Porcelain. For more news, subscribe to our store.

Bone porcelain, Powdered gold (52%). In the late sixties the last century at Imperial Porcelain Plant started making surprisingly thin, graceful cups. From usual porcelain, they differed in the raised whiteness, the thinnest glaze coat, and that lightness which was peculiar to the well-known grade of ancient Chinese porcelain under the name "egg shell". Thickness of the subjects made of "bone porcelain" is no more than 1 millimeter. For creation of technology of his production the group of specialists of plant was awarded ranks of winners of the State award USSR in the field of science and equipment.

At easy percussion of a product respond a pleasant and melodious ring. Despite the visible fragility, this porcelain possesses the increased mechanical durability. And the harmonious combination of classical forms to a refined filigree list gives to these products really precious look that puts them in the category of collection porcelain. The author of a list the national artist of Russia Alexey Vorobyevsky who came to work for Imperial porcelain plant in 1926 wasn't for nothing awarded the State award RSFSR of I. Created by him highly artistic.

Porcelain products entered a treasury of the world fine arts. In his creativity the most improbable images came to life, at a look on which captures spirit from the power feeding them. Alexey Vorobyevsky, the national artist of Russia, worked at plant from 1926 to 1992.

The teachers he called the teacher of school I. Mikhaylov and the art director of plant S. Both belonged to the creative association "World of Art" on which ideas the outlook extraordinary the ode Wren the artist's foot was formed.

For the life he painted more than one and a half thousand to a proizva of deniye, pron zonal with surprising poetic gift of perception of the world. The world of harmony and beauty, fantastic magic and fantastic images imprinted on a snow-white surface of porcelain. Vorobyevsky's works were represented at the largest exhibitions in Milan, Paris, New York, Brussels, Ostende, Prague.

Montreal, Leipzig were also steadily noted by diplomas and gold medals. Many works are included in collections of the State Hermitage and the State Russian Museum, the largest museums of Moscow, the International center of ceramics in Fayentsa (Italy). "Vorobyevsky's porcelain" is given to the presidents prominent to ny and public figures, masters of culture. Bone "Vorobyevsky's porcelain" is the whole series of tea and coffee services, and also surprising cups of different forms which collect hundreds of people, giving itself huge joy of communication with fine, bewitching art of the remarkable Russian artist. The presented work undoubtedly will become an unusual thing in a collection of the fan of porcelain.

It is remarkable that intricate drawing covers not only external, but also internal walls of a cup. The history of Imperial porcelain factory is inseparably linked with history of Russia, and its production the Russian art porcelain is presented in collections of the largest museums of the world. The imperial porcelain factory founded in 1744 in St. Petersburg under the decree of the daughter of Peter the Great empress Elizabeth became the first porcelain enterprise in Russia and the third in Europe. It is here where the talented Russian scientist D.

Vinogradov (17201758) discovered a secret of production of "white gold". Products of Imperial porcelain factory which are created by artists of top-class, strike with the beauty and refinement of judges from around the world here already nearly three hundred years, being an embodiment of beauty, elegance and a delicate taste. Imperial porcelain is a symbol of refinement and luxury of your house, reflection of your unique style.

It decorates interiors of houses of persons, whose taste doesn't raise doubts. Among them the former first lady of the USA Laura Bush, the former first lady of Brazil Marisa Letisija Lula da Silva, the queen of Malaysia Tengku Fauziya Abdoul Rasheed, the first lady of Mexico Marta Sakhagun. Director Valery Fokin, well-known performers Elena Obraztsova, Mireille Mathieu and many other famous people. Some details of decor are hand-painted so they can differ in colors as they are done by different masters. We are ready to answer all your questions. Thank you for your interest! About, The Imperial(Lomonosov) Porcelain Factory. The history of one of the oldest European porcelain ware manufacturers dates back to the 18th century, when according to the edict of the daughter of Peter the Great Empress Elizabeth the Imperial Porcelain Factory was established. Thanks to the talented Russian chemist, the inventor of Russian hard-paste porcelain Dmitry Ivanovich Vinogradov the secret of white gold production was unlocked.

For the first time in history of ceramics Vinogradov presented the scientific description of porcelain production thereby enabling manufacturing of high quality porcelain ware out of domestic raw materials. What especially makes The Imperial Porcelain Factory that famous is the production of magnificent table sets that started during the reign of Catherin the Great. Catherin porcelain was recognized as a piece of art together with canvases and sculptures of prominent masters. Among the most well-known table-sets ensembles are Gurev, Armorial table sets, and collectors plates from the Gothic stained glass table set. Later on the IPF started producing porcelain dolls small figures of animals and people that were used for table decoration.

The main task, which was given to the Imperial Porcelain Factory, was to provide whole Russia with porcelain- which still remains to be its motto. Till present day the IPF produces magnificent porcelain ware according to the sketches of most famous vases and table plates that belonged to the royal family. In our shop you can find the unique plates manufactured by The Imperial Porcelain Factory based on the original table sets, kept in the State Hermitage Museum and former residences of the members of the royal family.

This item is in the category "Pottery & Glass\Pottery & China\China & Dinnerware\Lomonosov". The seller is "best_russian_porcelain" and is located in St. This item can be shipped worldwide.