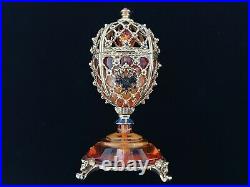 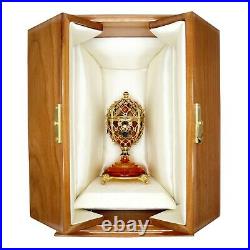 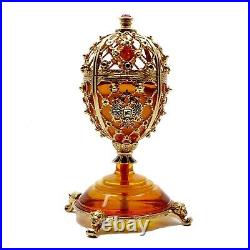 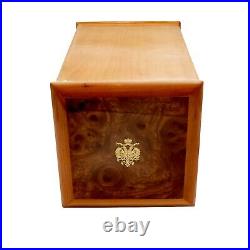 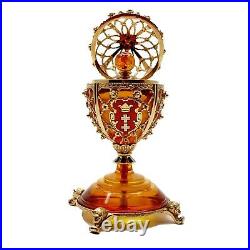 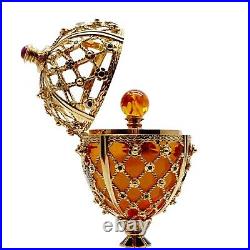 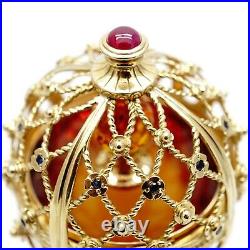 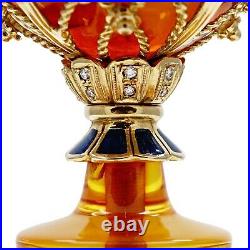 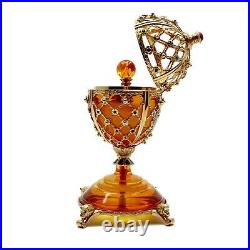 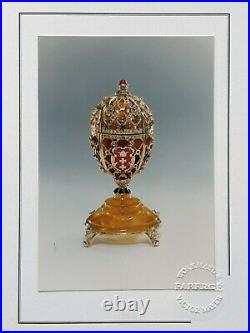 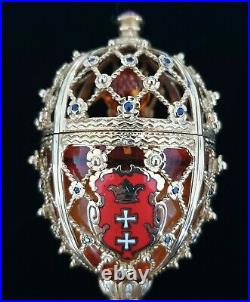 The original Faberge burlwood presentation box is included. The certificate of authenticity is also included. The base of this egg is made of the finest solid gold and hand-carved Russian / Polish Baltic Sea amber available, featuring absolutely exquisite solid 18K gold construction.

TheFaberge Company, then in St. Petersburg, now has offices in London, Paris, and New York, to continue this tradition.

In 1990 the Faberge Company appointed the jeweler Victor Mayer GmbH & Co. Of Pforzheim, Germany, founded in 1890, as the new and exclusive work master. This firm was chosen because throughout more than 100 years it has continued to maintain the essential manual skills and technical knowledge necessary for the continuation of Faberge's legacy.

Under one roof 60 craftsmen exercise more than 30 traditional skills - some of them unique tothis firm. Victor Mayer of Pforzheim, Germany is the only Work master in the world that has been entrusted with the license to produce and sell Faberge Company enameled 18k gold jewelry. Every item created is an original work produced in a limited edition and bears the coveted FABERGÉ hallmark andthe mark of work master Victor Mayer. The family owned enterprise, Victor Mayer GmbH & C, wasfounded in 1890 and is one of Europe's leading producers of handmade jewelry.

In more than 30 countries the name of the company founder is synonymous with the craft of the German goldsmith. Creations from Victor Mayer are the result of an unusual combination of tradition and innovation. Their greatest asset is anarchive of designs, models, and work books as well as specialty tools and equipment from 110 years of company history. Thanks to the knowledge handed down to the fourth generation, the craftsmen at Victory Mayer are able to use rare techniques of the goldsmith's art to produce incomparable jewelry and objects of art for Faberge. Victor Mayer was a Fabergé workmaster, the term used for the overseer of the workshop and craftsmen, from 1990 until 2015.

Mohr, a fourth generation Mayer, Victor Mayer created a new generation of eggs, starting with the first post-revolutionary egg presented to Mikhail Gorbachev as he received the Nobel Peace Prize in 1991, the Gorbachev Peace Egg. The eggs are the most complicated objects that Victor Mayer manufactured under the Fabergé label (it also manufactured enamel jewelry, watches, and other objets dart). Nine different crafts were required to complete them, and during a tour of the facility in the mid-2000s Mohr described them to me as the companys greatest source of pride. Once a symbol of Russian luxury, the House of Fabergé is synonymous with expert craftsmanship and exceptional quality. Rising to acclaimin the late 19th century for their impeccable Imperial eggs, Fabergé is also respected among todays collectors for their remarkable range of breathtaking jewels and decorative objects.

Gustav Fabergés first jewelry shop, which opened in 1842 in Saint Petersburg, Russia, was a modest storefront along one of the citys more popular shopping streets. His son, Carl, joined the business in the early 1870s. In addition to training with another designer to hone his skills, Carl also started work as a restorer of luxury and historical objects in the collection of the State Hermitage Museum.

It was this restoration work that caught the eye of Czar Alexander III, who was so smitten with Fabergés finesse that he dubbed them the Supplier to the Court of His Imperial Majesty in1885. It was that same year that Fabergé developed its first Easter egg as the Czars special commission for the Empress Maria Fedorovna.

She too was so taken with the resulting Hen Egg, as it became known, thatroughly 50 documented eggs were produced over the subsequent Easter seasons. These commissions brought such notoriety to Fabergé that, by the early 20th century, Fabergé had expanded their operation to include both internationalstorefronts and a wider array of products. Boasting a team of 500 employees at their Saint Petersburg hub, Fabergé was far and away the largest house of decorative arts in the nation. Much of the 20th century was difficult for the Fabergé house. Ousted from their operations in Russia in the late 1910s due to the rising tensions of World War I, the Faberge family fled west and tried to restart the business under the new name of Fabergé et Cie.

In 1937, anambitious American named Sam Rubin stole the name and formed Fabergé, Inc. Victor Mayer (1857 in Pforzheim, Germany 1946) founded thejewelry manufacture Victor Mayer in Pforzheim in 1890. In the time of Jugendstil/ Art Nouveau, the company created pieces based on the designs of well-known artists such as the jewellery designer Professor Georg Kleemann or Anton Krautheimer of the Munich Secession. In the art deco period and in the 1950sthe manufacture focused mainly on fine gold and silver ware. From the 1970s onwards again more jewelry was manufactured.

Until 1989 the company produced Fabergé jewelry for Fabergé & Cie in Paris. The manufacture Victor Mayer is well known for its high-end jewelry and the preservation of historical artisan techniques such as authentic fire enamel or guilloche.

Victor Mayer was born in 1857 into a family of thriving entrepreneurs. Between 1872 and 1877, Victor Mayer served as an apprentice where he underwent the training to become a steel engraver. Then he became oneof the first students at the Pforzheim Arts and Crafts School (PforzheimerKunstgewerbeschule) founded in 1877 by Grand Duke Friedrich I. After having completed his military service from 1879 until 1882, he could finally set offfor a three-year stay in Vienna, which he had planned for a long time. There he gained valuable experience in enameling and guilloche-engraving, sophisticated techniques which are still being used at the manufacture Victor Mayer today.

After returning to Pforzheim, he continued his studies at the Grand Dukes Artand Crafts School and received significant commendations in drawing, modellingand design. In 1890 he married Lina née Niemand. In the same year he foundedthe jewelry company Vogel & Mayer in Pforzheim together with the merchant Herrmann Vogel. Herrmann Vogel left the company in 1895 after conflict arosebetween the partners, and Victor Mayer continued the business alone under his own name.

In 1932 he withdrew from operative business and handed over his shares in equal parts to his son Oskar Mayer and his son in law Edmund Mohr. Victor Mayer died in Pforzheim on 13 October 1946. Victor Mayers creative works embrace four periods. He began in 1885 in the style of historicism at the Arts and Crafts School in Pforzheim, progressing towards the Jugendstil / Art Nouveau in the early 1900s, moving on to Art Deco after the First World War.

With his late avant-garde designs created after 1940, he pointed the way forward to the 1950s. The manufacture Victor Mayer GmbH & Co. KG was foundedin 1890 by Victor Mayer and Herrmann Vogel. After Herrmann Vogel had left thecompany in 1895, Victor Mayer continued the business alone under his name.

His two oldest sons, Victor and Julius, died in World War I. They had been designated to take over the company management from the founder.

Now two of the remaining children, Maria and Oskar Mayer, had to assume the commercial tasks in the company, while Victor Mayer was in charge of the technical managementand design. Maria married Edmund Mohr, who became an individually liable partner and co-owner of the company in 1925. In 1932 Victor Mayer withdrew from operative business and handed over his shares in equal parts to his only remaining son Oskar Mayer and his son in law Edmund Mohr. Until 1965 Oskar Mayer and Edmund Mohr were equal partners and responsible co-owners of the company. In this year the two grandsons of Victor Mayer, Dr.

Herbert Mohr-Mayerand his cousin Hubert Mayer, took over the management of the company. When Hubert Mayer died unexpectedly in 1989, Dr. In 1989 the company obtained the license to manufacture Fabergé jewelryand objects of art and achieved great success with these pieces until 2009.

In 1996 Fabergé jewelry by Victor Mayer was shown together with the works of Peter Carl Fabergé at the Metropolitan Museum, New York. The collection of Fabergé Eggs was the center piece of the Russian Pavilion at Expo 2000 in Hannover, Germany. A Return To Russia was the name of an exhibition staged at the Moscow Kremlins Armory in 2001. On display weresome thirty pieces of jewelry created by Victor Mayer.