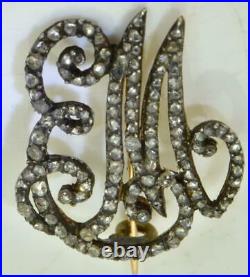 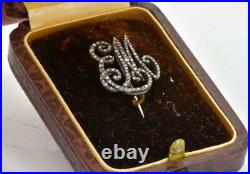 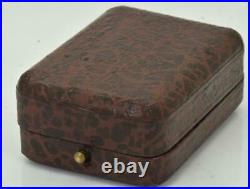 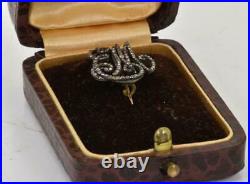 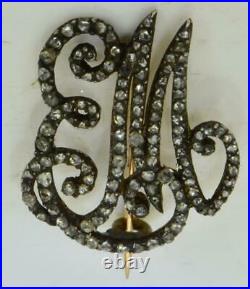 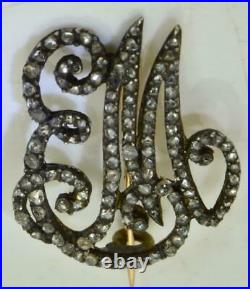 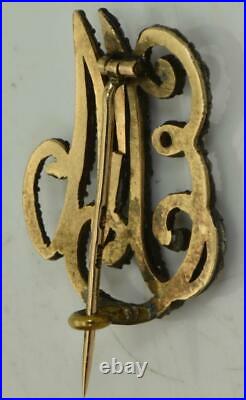 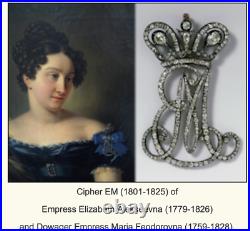 Imperial Russian antique jeweled gold&Diamonds MAID OF HONOR CYPHER EM c1820. Antique Imperial Russian jeweled gold&Diamonds MAID OF HONOR CYPHER "EM" c1820's. In the form of the Cyrillic initials'EM' for the Empress Elizaveta Alekseevna and Dowager Empress Maria Feodorovna, set with natural rose cut diamonds, mounted on silver-topped 14k gold. This is a miniature cypher(the big crowned cypher which is 75mm has been weared on a special ocassions and the miniature which is 20mm was wear daily). The insignia of the maids of honor consisted of the empresss initial in diamonds surmounted with the imperial crown.

This cipher was worn on the left shoulder suspended from the light blue ribbon of the Order of Saint Andrew. The design was revised at the very beginning of each new reign or at the death of a dowager empress. Thus, at the death of Empress Catherine II, the insignia was changed from the initial EII (for Ekaterina II) to M, for the new empress Maria Feodorovna, consort of Paul I. In 1801, when Alexander I ascended the throne, the cipher was designed with two initials, E and M, those of his mother, Dowager Empress Maria Feodorovna, and of his wife, Empress Elizabeth Alekseevna.

At the death in 1825 of Alexander I, the consort of the new emperor, Alexandra Feodorovna, from December 1825 to May 1826, had two dowager empresses at her side. The cipher, therefore, was composed of the three initials A, M, and E. Following the death in 1826 of Dowager Empress Elizabeth Alekseevna, and until 1828, when Dowager Empress Maria Feodorovna died, it had the two initials A and M. From 1828 until 1855, it was the single initial A of Empress Alexandra Feodorovna.

(It should be noted that the wives of Paul I, Alexander II and Alexander III, all of whom were given the name Maria upon conversion to the Orthodox faith, had their own personal design of their respective initial M). The last reign once again saw an M and an A for Dowager Empress Maria Feodorovna and Empress Alexandra Feodorovna, wife of Nicholas II. On this occasion, the initials were in the Old Russian style.

Nicholas I commissioned ciphers mainly from the jewelers Breitful and Bolin. The firms of Bolin and Saefftigen continued the production under Alexander II along with the established jewelers Keibel and Butz. During the reigns of Alexander III and Nicholas II, the firms of Bolin, Butz, Hahn, and Koechly were the main providers of these objects. In the final years, beginning around 1910, it was the workshops of Butz, Blank, and occasionally Johansson.

It may come as a surprise that Fabergé, the leading jeweler of the last two reigns, was not among them. This was no doubt by Fabergés own choice. He did not specialize in serial production of this kind. Measuring roughly 3½ inches (9 cm), they are made of gold (56 zolotniki, equivalent to todays 14 karat) and silver, into which the brilliant-cut diamonds are set. The original recipients are known in many cases, increasing both their historic and monetary value.

In Finland, a former grand duchy of the Russian Empire, a fair number are still preserved by the families of the initial owners. A portrait of their ancestress in court costume wearing her cipher takes pride of place in their homes.