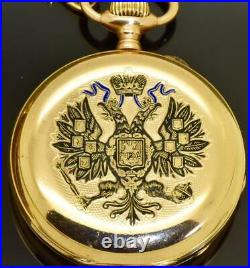 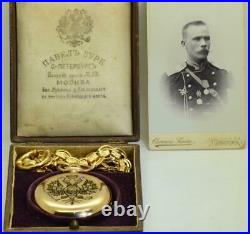 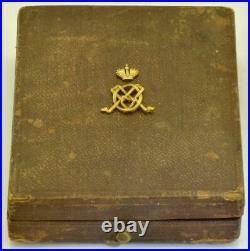 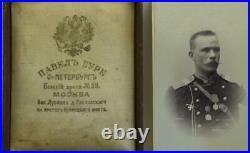 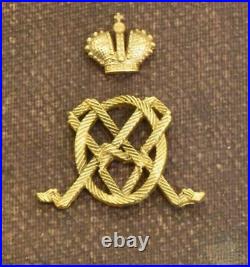 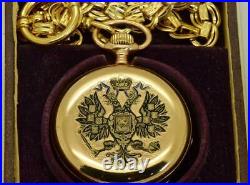 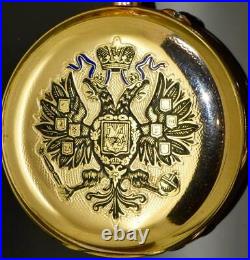 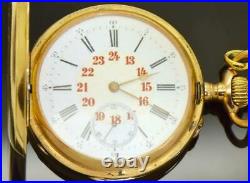 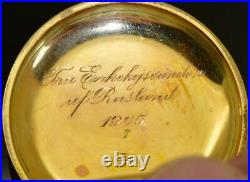 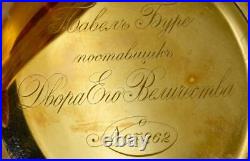 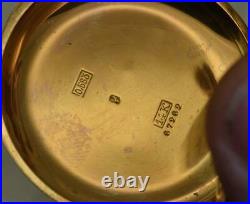 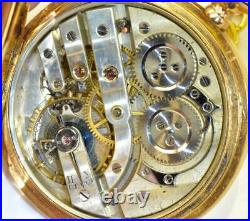 MUSEUM QUALITY Imperial Russian Pavel Buhre 14k gold&enamel award pocket watch. This was a personal present from the Widow Empress Maria Feodorovna of Russia(the mother of Nicholas II) to the decorated hero from the Russo-Japanese War Captain Leonid Aleksyevich Jukov. The watch comes from his family estate together with his real CDV card photo. The watch is engraved in Danish(because Maria Feodorovna was with Danish origin) "Fra Enkekejserinden al Rusland 1905" (from the Widow Empress of Russia). A pocket watch personally awarded by a Roayl memeber was considered for the highest military award in the Russian army with the same rank as 1st degree orders. Pavel Buhre was the official watch master to the Imperial Russian Court. The front case depicting the enamelled(black and blue) Imperial Russian Romanov family crest-an enamelled double headed crowned eagle. The watch is really impressive-92g heavy, 49.2mm in diameter. This is much more than a watch-this is a piece of the history! This watch is must for every serious museum or for every serious collector of Russian watches!

Pavel Buhre was one of the first watch companies in Europe. The company was founded by Karl Buhre, a Russian businessman of German descent. At first the Buhre watch company was located exclusively in St. In 1874, 34-year-old Pavel Buhre, Sr. By order of the imperial court the Buhre factory produced gift watches, which the emperor presented to officials for distinguished public service, foreign diplomats and prominent figures of culture.

Buhre watches were also given as bonuses to officers and non-commissioned officers in the Russian army. Pavel Buhre watches were awarded top prizes at many national and international exhibitions, including silver and gold medals at Worlds Fairs in Paris in 1889 and 1900, respectively. A silver medal in 1889, and a gold medal in 1900.

In 1916, Pavel Buhre company received the Swiss patent number 74144 for the in-house chronograph. The Buhre produced upmarket products as well as watches for the public at large.

Prices for a Pavel Buhre watch started at only two rubles and went as high as several thousand. This Russian company became one of the worlds leading producers of affordable watches for broadest social demographics. Auctiva offers Free Image Hosting and Editing. The item "MUSEUM QUALITY Imperial Russian Pavel Buhre 14k gold&enamel award pocket watch" is in sale since Sunday, February 21, 2021. This item is in the category "Jewelry & Watches\Watches, Parts & Accessories\Watches\Pocket Watches".