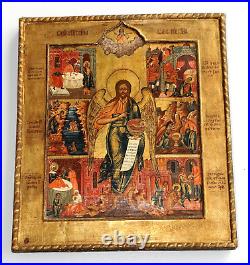 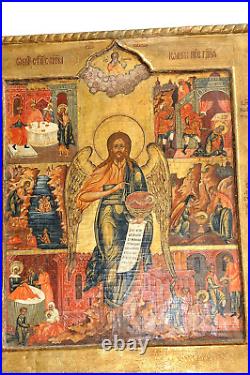 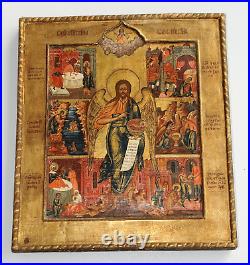 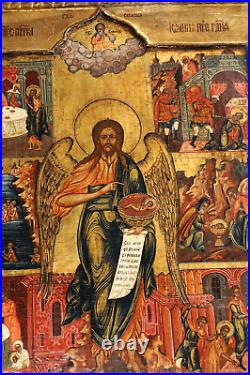 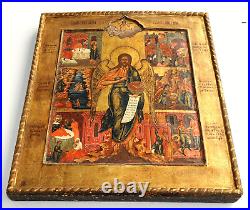 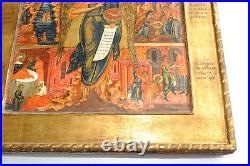 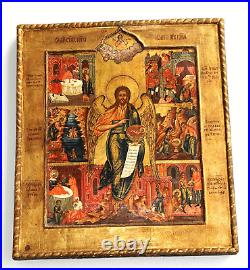 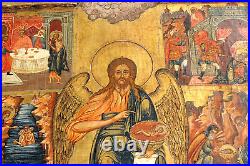 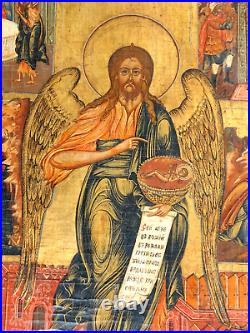 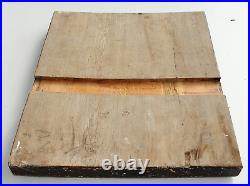 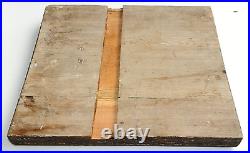 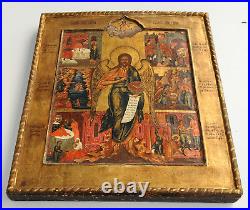 In Christianity, the Trinity plays a special role - the unity of the Father, Son and Holy Spirit. It is believed that they are one, and together they create the world, provide for it and sanctify it. In honor of the Trinity, a holiday of the same name appeared, which is celebrated 50 days after the resurrection of Christ, that is, after Easter.

14.25 Inch in width. EGG TEMPERA - GILDED - PAINTING. ICON is GOOD CONDITION, 100% AUTHENTIC. The quality of this MIRACLE ICON is very fine and detailed with beautiful facial painting, good condition, regarding its age.

With the gilded painting icon, creates magnificent beauty of the product, sophistication. Icon in good condition in corresponds to regarding its age. This icon been double check and we Guarantee everything by one hundred percentage. Good so see our many photos to get the best idea of condition. The quality of this Icon is very fine and detailed with beautiful facial painting. Original Icon, gorgeous painting creates magnificent beauty of the product. The best indication of condition is to study the photographs carefully, photos are part of the description. JOHN BAPTIST THE FORERUNNER FROM A DEISIS Russian. 19th century Tempera on wood panel. The background and border stripped to gesso, minimally restored.

The icon forms the right panel of a three-piece Deisis (for the left and central panels see: The Deisis: Christ Pantocrator and The Deisis: The Mother of God). John the Baptist is represented half-length in a three-quarter turn towards Christ depicted in the central panel. The saint is dressed in a green himation over a camel-skin tunic. In his left hand, he holds an open scroll and the Christ Child in a chalice; with his right, he points at the Saviour.

The scroll is inscribed with a passage from the Gospels: "Behold the Lamb of God, which taketh away the sin of the world" (John 1:29), bearing a direct allusion to Christ's atoning sacrifice. The outer border is painted with family saints: the Angel Guardian on the left and St. The composition of the Deisis (or Deesis, "supplication" in Greek) unites the three most important figures of the Christianity.

It features the Mother of God and Saint John standing on either side of Christ, symbolising their intercession on behalf of mankind. Byzantine in origin, the type became one of the most widespread in the Eastern Orthodox tradition. It can often be found in the upper centre of the altar screen, the iconostasis, serving the focal point of its composition.

In Russia, the Deesis could be extended to employ other holy figures, such as archangels, apostles, Church Fathers, saints, martyrs. The icon distinguishes itself by original and bright artistic expressiveness, peculiar to the best samples of Northern manner of icon-painting.

This rare icon executed in mainly gold and yellow and brown colors against a golden background shows the perfect craftsmanship of the Russian icon painter. Take pleasure in this gift and prevent all bad luck. Deliver everyone from the future torment, who call out to you here together: Alleluia, alleluia, alleluia». Enjoyed an unrivalled command of every technique employed Art painting school, as well as with the gold and silverware. This unique fusion of the national creative spirit and contemporary culture helped to create some of the greatest masterpieces of Russian and world jewelry.

Russia has long been a leader in production of enamel with orders and medals and other enamel wares. In Russia, nice enamel objects were considered to be the most expensive and valuable. The Evangelists Matthew and Mark narrate about the martyrdom of Saint John the Baptist in the year 32 after the Nativity of Christ.

After the Baptism of the Lord, Saint John the Baptist was imprisoned by Herod Antipas, the tetrarch, ruler of Galilee. After the death of Herod the Great, the Romans divided the territory of Palestine into four parts and placed their protege as ruler in each part. Herod Antipas received Galilee from Emperor Augustus. The prophet of God openly denounced Herod because, having left his lawful wife, the daughter of the Arabian king Aretha, he lawlessly cohabited with Herodias, the wife of his brother Philip. On the day of his birth, Herod arranged a feast for the nobles, the elders and the commanders.

Herodias' daughter Salome danced in front of the guests and pleased Herod. In gratitude to the girl, he swore to give everything she asked for, even up to half of his kingdom. The bad dancer, on the advice of her evil mother Herodias, asked that the head of John the Baptist be given to her immediately on a platter. He was afraid of the wrath of God for the murder of the prophet, whom he had previously obeyed. He was also afraid of the people who loved the holy Forerunner. But because of the guests and a careless oath, he ordered that St. John's head be cut off and given to Salome. According to legend, the mouth of the dead head of the preacher of repentance once again opened and said: Herod, you should not have the wife of Philip, your brother. Salome took the dish with the head of St.

John and took it to her mother. Furious Herodias pierced the tongue of the prophet with a needle and buried his holy head in an unclean place.

But the pious Joanna, the wife of Herod's steward Khuza, buried the holy head of John the Baptist in an earthen vessel on the Mount of Olives, where Herod had his own piece of land (the acquisition of an honest head is celebrated on February 24). The holy body of John the Baptist was taken that same night by his disciples and buried in Sebastia, where the atrocity had been committed. After the assassination of Saint John the Baptist, Herod continued to rule for some time. Pontius Pilate, the ruler of Judea, sent Jesus Christ bound to him, over whom he mocked.

An icon is not a painting in the sense we normally regard pieces of art, although it is an image that is painted. An icon is a window out of the obvious realities of everyday life into the realm of God. Every paint-stroke has a meaning hallowed by centuries of prayer. Icons are religious images that hover between two worlds, putting into colors and shapes what cannot be grasped by the intellect.

Icons are the visual equivalents of the Divine Scriptures. Not every religious painting can be considered an icon.

Icons are religious pictures that convey inner spiritual meaning of their subject matter. The Son of God came to restore the divine image in human form.

Iconography is the graphic witness to this restoration. Antique Russian Icons as Masterpieces of Religious Art. It is not a secret that antique Russian icons are renowned throughout the world for their spiritual power for believers. However, these beautiful hand-painted images also have a very high artistic value. Distinguished by the variety of colors, harmonious forms, and the use of reverse perspective that creates an optical illusion allowing the viewer to "look through" the painting, antique Russian icons are indeed masterpieces of religious art.

Add to this their long and interesting history, and you will understand why these holy images are highly collectible today. It is also worth noting that antique Russian icons have even become an investment asset for many collectors of art. Pictures are part of Description.

This item is in the category "Collectibles\Religion & Spirituality\Christianity\Icons". The seller is "rima83" and is located in this country: US. This item can be shipped worldwide.