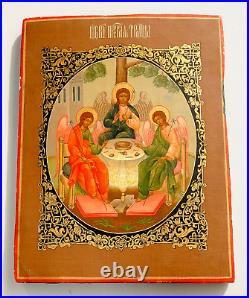 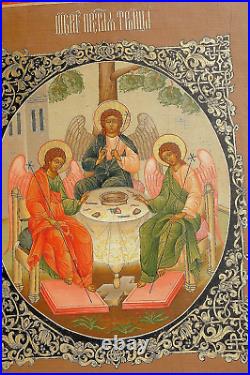 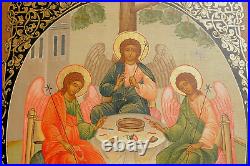 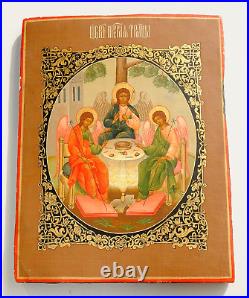 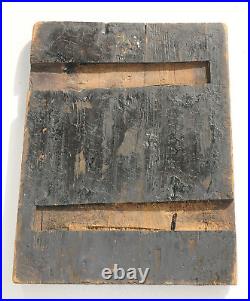 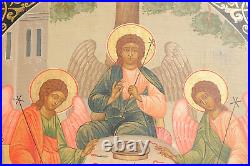 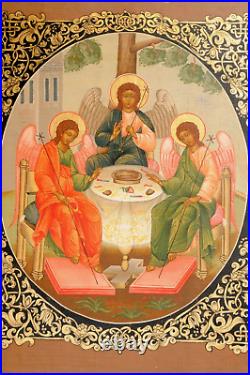 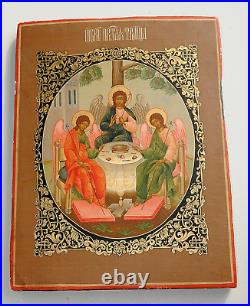 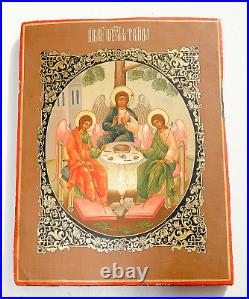 It is believed that they are one, and together they create the world, provide for it and sanctify it. In honor of the Trinity, a holiday of the same name appeared, which is celebrated 50 days after the resurrection of Christ, that is, after Easter. 11.50 Inch in width. EGG TEMPERA - GILDED - PAINTING. ICON is GOOD CONDITION, 100% AUTHENTIC.

The haloes made of gold. The icon depicts three angels sitting under the tree, around the table with the calf's head in the cup placed in its center. This head symbolizes the Lamb of God; and the lamb, as you know, is a symbol for Christ. In this way, the meaning of this religious icon is sacrificial love. As for the angels of the Old Testament Trinity icon, they represent the Father (to the left), with His right hand blessing the cup, the Son (in the center), ready to die as a sacrifice for the sins of humanity, and the Holy Spirit (to the right) who completes the composition, confirming the high meaning of sacrificial love.

Icons of the Trinity depict the event recounted in Genesis where. Appear before Abraham and his wife Sarah and foretell, despite their advanced age, the birth of their son. Early Christian theologians interpreted Abraham's use of the singular - he addresses the three visitors as "My Lord" - as an epiphany or divine manifestation of God; in this case in his triune form. Three Angels are seated at a table; in the background a tree; buildings on the left, a hill on the right; with these simple elements Russian iconography symbolically depicts the Trinity as the three young men who appeared to the Patriarch (protects) Abraham at the Maple, as recorded in chapter 18 of the Book of Genesis. Russians generally do not distinguish the three persons of the Trinity in this type by inscription, though some understand them thus: Christ at the center, above whom is the tree, signifying the wood of the cross; the Father to the left before a building symbolizing the Church; the Holy Spirit on the right below a hill signifying spiritual ascent.

The image of the Trinity, that corresponds most fully to the teaching of the Church as regards both its content and its artistic expression, is to be found in the greatest of works, known as the Trinity by Andrei Rublyov, painted by him in the monastery. The icon distinguishes itself by original and bright artistic expressiveness, peculiar to the best samples of Northern manner of icon-painting. This rare icon executed in mainly gold and yellow and brown colors against a golden background shows the perfect craftsmanship of the Russian icon painter. Take pleasure in this gift and prevent all bad luck. Deliver everyone from the future torment, who call out to you here together: Alleluia, alleluia, alleluia». Enjoyed an unrivalled command of every technique employed Art painting school, as well as with the gold and silverware. This unique fusion of the national creative spirit and contemporary culture helped to create some of the greatest masterpieces of Russian and world jewelry. Russia has long been a leader in production of enamel with orders and medals and other enamel wares. In Russia, nice enamel objects were considered to be the most expensive and valuable. An icon is not a painting in the sense we normally regard pieces of art, although it is an image that is painted.

An icon is a window out of the obvious realities of everyday life into the realm of God. Every paint-stroke has a meaning hallowed by centuries of prayer.

Icons are religious images that hover between two worlds, putting into colors and shapes what cannot be grasped by the intellect. Icons are the visual equivalents of the Divine Scriptures. Not every religious painting can be considered an icon. Icons are religious pictures that convey inner spiritual meaning of their subject matter. The Son of God came to restore the divine image in human form.

Iconography is the graphic witness to this restoration. Antique Russian Icons as Masterpieces of Religious Art. It is not a secret that antique Russian icons are renowned throughout the world for their spiritual power for believers. However, these beautiful hand-painted images also have a very high artistic value. Distinguished by the variety of colors, harmonious forms, and the use of reverse perspective that creates an optical illusion allowing the viewer to "look through" the painting, antique Russian icons are indeed masterpieces of religious art.

Add to this their long and interesting history, and you will understand why these holy images are highly collectible today. It is also worth noting that antique Russian icons have even become an investment asset for many collectors of art. Great Icon, from Royal Imperial ICON, 19th century, 1850 - 1900 year, of Bishop St. People believed that Nicholas understood human weakness better than any other saint. He defended them against every injustice and protected them.

He also protected travelers if they got into difficulty. He became the patron of countless churches, professions and communities. He is present in almost every icon corner of a Russian house because he is also considered to be the patron saint of men.

In this icon, Nicholas is shown with the classic characteristics ascribed to him. He wears a bishop's stole about his neck and holds a Book of Gospels in his left hand. With his right hand he delivers a blessing.

Resting on stylized clouds, the Mother of God presenting him with the bishop's stole (omophor) appears on his left. On the right, Christ presents the Book of Gospels.

During the First Council of Nicaea, Nicholas is supposed to have boxed Arius's ears, because he called into doubt the divinity of Christ. The emperor and the bishops present wanted to dismiss Nicholas from his office of bishop, but the Mother of God and Christ took up Nicholas's cause and gave him back the attributes of his bishop's office. Condition: authentic icon in original condition. The relics of this popular saint both in Europe and in the Slavic and Greek world.

Were stolen from Myra in Bari in 1087 who then contested them in Benevento. There are several literary versions, according to one them, Nicholas, born in Patara in 280 du bishop of Myra in Licia where he died in 352. As the story goes it is said that he opposed the council of Nicaea to the heretical bishop Arius and is consequently stripped of his sacred insignia and imprisoned, but then is freed by Christ and the Virgin who appeared to him giving him back the freedom and dignity of the bishop and confirming him in true faith. Pictures are part of Description.

This item is in the category "Collectibles\Religion & Spirituality\Christianity\Icons". The seller is "rima83" and is located in this country: US. This item can be shipped worldwide.