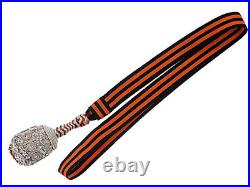 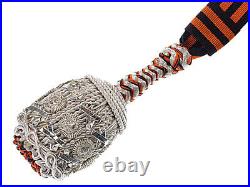 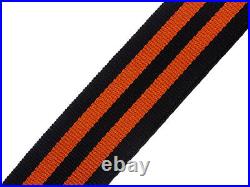 Whole length: 59.5cm Ribbon length: 50cm. Golden weapon "For Courage" - an award weapon in the Russian Empire, ranked as a state Orders from 1807 to 1917. The award of the Golden Cold Weapon - a sword, a cortico, and later a saber - was made as a sign of special differences, for the personal courage and selflessness shown. On March 19, 1855, a St.

George Sword-Knot was introduced for Golden weapons: before that, such weapons were carried with the usual statutory Sword-Knots. Since 1913, the Golden Weapon "For Courage" was officially called the St. George Weapon and was considered one of the distinctions of the Order of St. We have the best choice of reenactment goods: Napoleonic period, WWI, WWII.

May order whatever you want. We have best choise of reenactment stuff always in stock! We provide services in consultation, making uniforms and reenactment stuff for any military period as well as complete uniforms and uniform sets with shoulder boards, emblems, orders and any equipment for Imperial Russian Officers Guards, Imperial Navy, Army, Cavalry Parade and field uniforms of Cossacks.

All the items can be made to order. If you don't find what you need, please ask!

The item "Russian Imperial Infantry and Navy Officer's St. George Sword Knot 1855 Golden Wn" is in sale since Thursday, August 26, 2021. This item is in the category "Collectibles\Militaria\1784-1860\Reenactment & Reproductions".

The seller is "leibstandart_com" and is located in Zlonice. This item can be shipped worldwide.