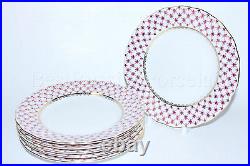 Set of 6 Dessert Plates "Net Blues", Porcelain Hard, NEW. The item is HAND PAINTED and has a stamp of the factory on the bottom. Dear customers, visit our store, please. There are a lot of as beautiful things as this one there. Here is our store - Best Russian Porcelain.

Graceful, bright, summer variation of the well-known pattern "A cobalt grid", the Imperial porcelain plant which has become the card. The decor is made based on a service list "Own", created at Imperial porcelain plant in the middle of the XVIII century for the empress Elizabeth Petrovna. Bright asterisks of the 22nd karat gold flash in places of crossing of lines of cherry color. If to look narrowly, they are similar to easy dragonflies or the small angels flied to house, cozy tea drinking. Any set of Imperial porcelain plant is, first of all, the highest quality and beauty argues with which anything can't other.

The beauty, refinement, practicality, improbable durability and all that is so appreciated by modern people worldwide, connected together, having become really the best of the best. The history of Imperial porcelain factory is inseparably linked with history of Russia, and its production the Russian art porcelain is presented in collections of the largest museums of the world. The imperial porcelain factory founded in 1744 in St. Petersburg under the decree of the daughter of Peter the Great empress Elizabeth became the first porcelain enterprise in Russia and the third in Europe.

Thank you for your interest! This item includes - Six. About, The Imperial(Lomonosov) Porcelain Factory.

Till present day the IPF produces magnificent porcelain ware according to the sketches of most famous vases and table plates that belonged to the royal family. In our shop you can find the unique plates manufactured by The Imperial Porcelain Factory based on the original table sets, kept in the State Hermitage Museum and former residences of the members of the royal family.

Incomparable hand dropped vases in Russian Empire style such as White night on Moika River, Michael Castle; marvelous vases made in technique of glazed landscape painting such as Russian side, Hermitage are made in a skillful way by the masters of the IPF and represented in our shop. You can find a great variety of porcelain statues made in the technique of hand dropping with manual overglaze painting such as The Firebird, Lady with a parrot, Fortuneteller and countless numbers of other masterpieces. Touch the sumptuousness, in the best traditions of the Royal Court. , « », « »; , « », «». The item "Russian Imperial Lomonosov Porcelain set 6 Dessert Plates Net Blues Gold 7.09" is in sale since Monday, May 6, 2019.