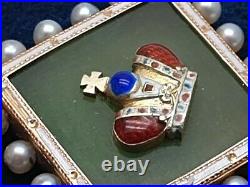 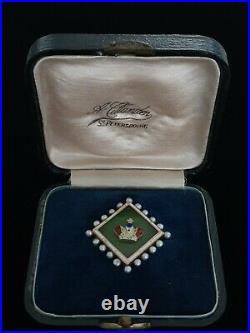 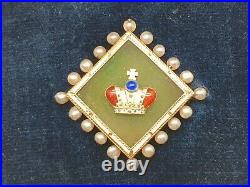 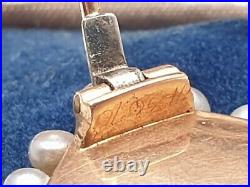 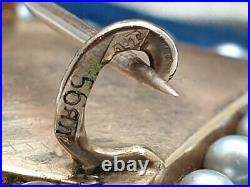 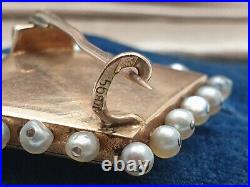 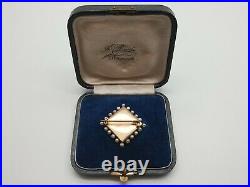 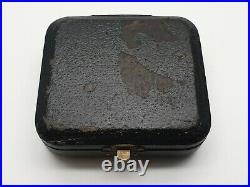 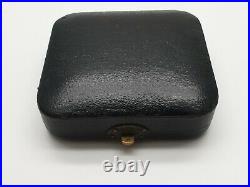 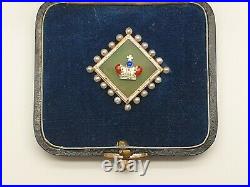 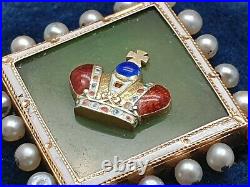 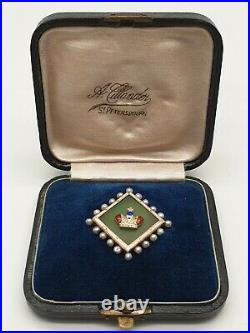 A RUSSIAN IMPERIAL GOLD AND BLUE ENAMEL BROOCH / PIN GEM-SET WITH NATURAL SEED PEARLS, IN THE FORM OF A DIAMOND, HALLMARKED (AT) FOR WORKMASTER ALEXANDER TILLANDER, ST. For your consideration is a rare and important Imperial Russian 56 Gold, Diamond, Ruby, and Sapphire pendant by Imperial Russian jeweler, Alexander Tillander (AT). In the form of a diamond, constructed of 14K gold, gem-set with natural seed pearls, Guilloche enamel, and a Russian Imperial Crown set at center on a natural Siberian nephrite jade base.

Hallmarked on bail for 56 Imperial Russian gold assay standard and work master initials AT for Alexander Tillander, c. Dimensions: 0.8" x 0.8". Weight is 7.27 grams. Gemstones: 20 natural seed pearls, Siberian nephrite / jade. Alexander Tillander was a prominent St. The Russian Imperial Court awarded the firm with a large number of commissions between 1909 and 1911. Tillander left St Petersburg for Finland where he died in 1918. Tillander was founded by Alexander Tillander who, as a young boy at the age 11, was sent out to go and take up an apprenticeship at a barber in St-Petersburg.

Things didnt go as expected and he ended up at a Finnish master goldsmiths workshop instead. After 7 years as an apprentice, Alexander started working for a German master named Carl Becks who was a supplier for the Russian Imperial court. In 1860, at the age of 23, Alexander started for himself in St Petersburg. Working hard, his business evolved into a successful company renowned for its quality workmanship.

Following the trends of the time, Tillander produced a lot of classical revival jewelry featuring filigree and granulation over the 1870s and did well with objects dart made of precious materials. In 1891, Alexanders son, Alexander Jr. At the beginning of the 20th century, he ran the entire operation by himself and business was booming.

The first Russian Revolution in 1905 didnt affect the business too adversely and up until 1916 the company kept its head well clear of the water line. Although the Tillanders were prepared and had secured a good part of their assets abroad the anarchy that followed the 1917 revolution proved to be no healthy climate for a jeweler and the St-Petersburg shop was closed. Was shot by bandits two months after the shop closed and died a year later in 1918. Didnt return to St Petersburg after the familys summer holiday to Finland in 1917.

When by 1918 the dust settled after a short civil war, he partnered up with a Finnish jeweler named Viktor Lindman before reestablishing the family company in Helsinki where it still resides today, now in the hands of the fourth generation of Tillanders. The item "TILLANDER Imperial Eagle Russian 56 Gold Brooch Pendant Pin FABERGE Tsar Romanov" is in sale since Wednesday, August 19, 2020. This item is in the category "Jewelry & Watches\Vintage & Antique Jewelry\Vintage Ethnic/Regional/Tribal\Russian". The seller is "galleryoff5th" and is located in New York, New York. This item can be shipped worldwide.