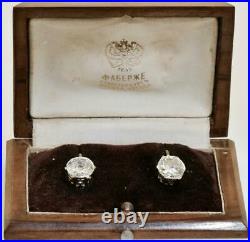 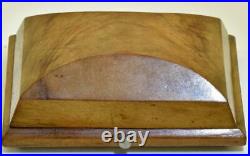 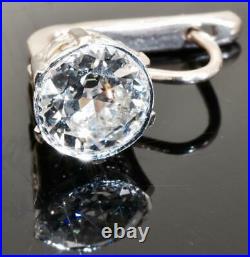 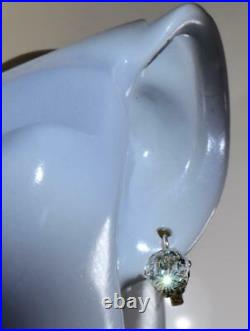 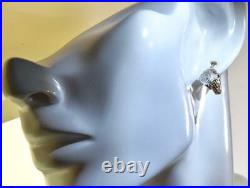 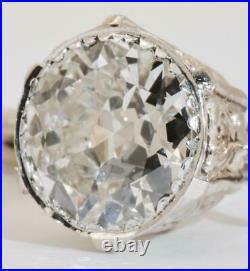 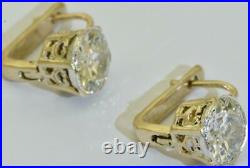 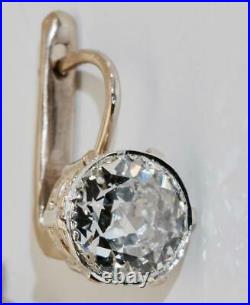 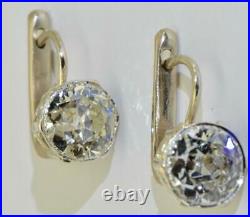 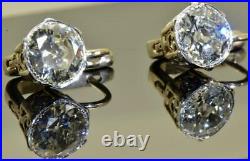 Unique Imperial Russian Faberge 4ct Diamonds gold earrings for Empress Alexandra. The set has been awarded by Empress Alexandra Feodorovna to his Maid of Honor Countess Maria Velio. The set comes from her family estate. The set is made of 14k gold, signed with the Imperial Russian 56 gold standart and K. Each stone is 2ct old Mine cut(8mm in diameter), G-H color, VS2 clarity. A Diamonds specially chosen for a queen... A lot of sparkles-the sparkle of old cut diamonds is deeper and warmer, almost glowing in a way that draws the eye into the stone instead of bouncing the light back out. This makes old cut diamonds star performers in candlelight and other low light settings. The set comes with the original luxury wooden presentation box signed in RussianFaberge, St. The set was presented in 1911 to Countess Maria Ivanovna Velio, maid of honor to Empress Alexandra Feodorovna, whose family had a distinguished record of military and civil service to the Russian empire. Young ladies who were appointed as maids of honor. To the Empress came from the most illustrious families of the Russian Empire. Their fathers served with distinction in either the civil service, the military, or at court. The nomination was thus an honor for her father and her family at large, as much as it was for the young lady. Prior to being appointed as a maid of honor, a young lady's character, and her family and social circle, were carefully scrutinized.

The position afforded a young lady many privileges, the foremost of which was access to the Imperial court. Such access allowed her to form an influential network, which could be beneficial to her future. There were two categories of maids of honor: maids of honor of the suite and maids of honor of the city. The former, who were required to live at the palace, constituted a much smaller group (from one to five during this period), and the latter a much larger group.

NOTE:PLEASE OBSERVE CAREFULLY THE PHOTOS! IT IS A SIGNIFICANT PART OF THE DESCRIPTION.

Every possible defect which is shown in the photos, but not mention in the description, will be considered for described. All the photos shoot by professional Nikon 105 Macro lens under 40x diopter magnification, so you can explore even the smallest detail like under microscope!

This item is in the category "Jewelry & Watches\Fine Jewelry\Fine Earrings\Diamond". The seller is "riaerica2000" and is located in Sofia. This item can be shipped worldwide.